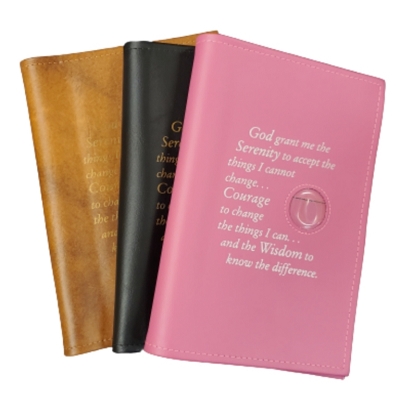 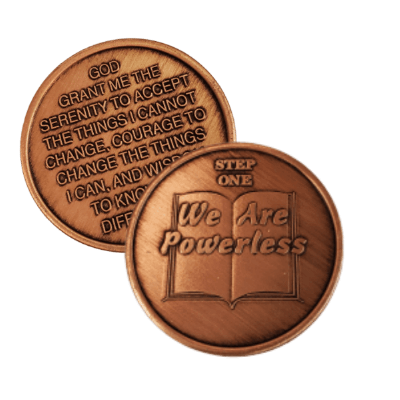 One Day At A Time Mobius Sterling Silver AA Necklace
$49.99

Earning an AA chip is a big milestone in the live of a recovering addict, and each new chip is another step. Here's what it means to earn each new AA chip.

Earning an Alcoholics Anonymous chip is no easy feat. It may seem like mile markers to those who are not in the program. It may seem laughable to take it everywhere with you.

Yet, this all comes down to you.

The chip system is to believed to be started in 1942. Yet, it is not concrete in its origins.

Once it started, it spread to many other A.A. groups. It now has become a staple of Alcoholics Anonymous.

Anatomy of an AA Chip

What is even on these chips? While they can vary, some common characteristics of a recovery token are:

The equilateral triangle represents the three pillars of the program: unity, recovery, and service. It also can represent the three parts of the disease: physical, mental and spiritual. The circle represents wholeness and serenity.

Each chip has a significance based on the time you've spent sober. So what does earning an AA chip mean? Let's take a look at the most common AA chips to receive during the process.

The biggest starting point comes with some questions.

Where did this system even come from? Why am I getting this little circle chip? What's the point?

The color varies, but it is typically bland white or aluminum to serve as a reminder. Often called a 'surrender chip' these chips signify more than just a pocket coin.

Even the simplest AA chip to earn is technically the hardest to actually earn. It is a reminder of your first day in a new direction. A new life. A 24-hour constant memento that this is now you; earning it means something different for everyone.

The 24-hour chip is a reminder of the first step. The launch pad to leading a sober life.

Your first AA chip can mean everything.

A month in. By now you've been through withdrawal. Physical and mental dependence on alcohol have been a part of your life for a while now. Thirty days may not seem like much, at first.

Most AA groups signify this recovery token in red.

Some may think that being an addict is an easy thing to give up. After a certain amount of time, you will magically just be better, right?

Wrong. Thirty days is a major milestone. This AA chip means changes are taking place, mentally and physically. It is not a simple adjustment.

Of course, there are some debates on what actually takes place in your body after being sober for 30 days. It depends on how long you've been addicted. Each person's case will be different.

While a longer stretch than the first month, the positive effects are still adding up. You've gotten two AA chips by now. One to signify dragging your feet to the steps of your meeting space and sticking it out. The other signifying that you have yet to give up a month in.

A gold anodized aluminum medallion awaits you two months in to sobriety. It is a step in the right direction, again. One foot at a time.

The worst part about withdrawal is that you're never clear on when it ends. Fortunately, recovery tokens are there to remind you why you're taking on sobriety.

In three months, you've overcome major obstacles. The ad business for alcohol is booming. There are reminders in restaurants, in magazines, in supermarkets; the list goes on.

Instead of giving in, three months of being sober nets you another AA chip. Typically, this is an emerald green color. Ninety days begins a turning point in sobriety for most.

Three months in is crucial in defining addiction and how it leads you and your life. You've been sober for three whole months, and it may have been a long time since you've been able to say that.

As with all of these recovery tokens, they are earned. People don't give out AA chips on a whim.

Day One Hundred and Eighty

A half a year now, a feat in itself. This AA chip is typically a dark blue aluminum token or a blue plastic poker chip.

It's a token of pride. Six months sober is nothing to be shy about. This chip signifies that it's been a struggle for six months now, but addicts have overcome.

Please note that while having a chip and even making it to six months sober, it is still a battle. Some days may be better than others, but sobriety is a constant challenge and should not be taken lightly.

This is the last hurdle before the big one-year mark! Purple is the color for the nine month AA chip. Again, there are no real end dates. A chip signifies a constant reminder that you've got this under control. It does not mean that the fight is 'won'.

Making it to one year is a special occasion. Being proud of milestones is the whole purpose of AA chips. They serve as a reminder, yes, but also for a proud reminder that you're beating addiction.

One more month, one more year, one less drink. Addiction continues, but you don't have to keep feeding the monster.

Yearly anniversary tokens are bronze instead of aluminum. These AA chips have more weight to them, as do sobriety milestones! Urges will continue, and the battle to not relapse continues.

How We Can Help

We would like to celebrate your success, too. We're proud to ship out little pieces of sobriety all over the world. It is a process that you should not face alone!

If sobriety tokens aren't your thing, we also offer jewelry, wristbands, and more!

Here at Token Shop, we understand your shipping needs. We are upfront and honest about it, with quick shipping available at a reasonable price.

Please let us know how we can help you on your sobriety journey! Whether you're in Alcoholics Anonymous or any other addiction group, contact us for any questions you may have!